The idea for this portrait of Cris Sommer-Simmons germinated before David joined both the start and finish of the inaugural Cannonball Run, in which Cris was the only American woman who participated. Her impressive 20th place finish paid tribute to her idol and the namesake of her 1915 Harley-Davidson, Effie Hotchkiss, who became the first woman to ride cross country in 1915. Sought after by various museums and collectors, David felt that this original oil painting rightfully belonged in the possession of Cris and Pat.

“The Cannonball was like no other event I have ever witnessed. I was fortunate enough to be both at the start in Kitty Hawk and the finish In Santa Monica. Kitty Hawk was a great opportunity to photograph the anticipation and the comraderie developing between many of the participants. It would have been wonderful to go the distance in the race with everyone, but I had to get back to my studio and paint two of the three winning trophies. I finished in the nick of time to arrive for the reception of all the riders at the pier in California. As an artist who spends his hours combing through the rich history of motorcycling, it seemed this was a race made especially for me. At the winner’s banquet, I had the great honor to award 2 of the 3 winning racers with original paintings. I was especially interested in Cris Sommer-Simmons as she has a very special passion in common with me. She happens to love the romance of the history of women on motorcycles as much as I do. Enough for her to have composed a beautiful book on the subject, which sits next to my easel. Having this lovely slice of history in common with her has inspired me to do this painting of her. She was originally inspired by the story of Effie Hotchkiss, (she named her Harley Davidson after her) and even adopted one of Effie’s rituals, which especially intrigued me. Just as Effie did, Cris filled a small vial with water from the Atlantic Ocean and kept it with her throughout the entire journey to finally release it’s contents into the Pacific Ocean.”

Each of these beautiful prints comes hand-numbered and signed by artist David Uhl, Cris Sommer-Simmons and her husband Pat Simmons (of Doobie Brothers fame). A total of only 103 canvas prints will be made available to the public (89 – the year Cris met Pat and the number on her 1915 H-D) prints, plus 9 Artist Proofs and 5 House Copies.
Prices are subject to change based on aftermarket availability.
To reserve your print please contact Greg Rhodes at: 303-913-4840 or greg@uhlstudios.com 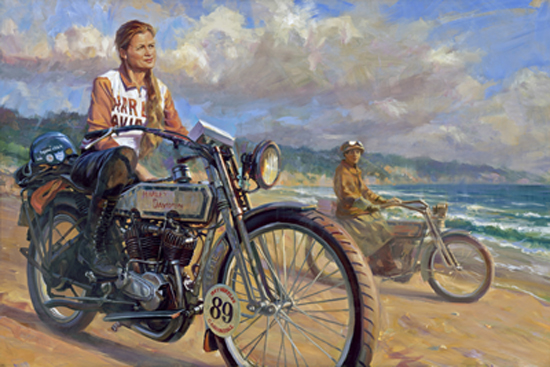