Earlier this year, David partnered with Art of the Spirits on his Bonnie and Clyde piece, “Final Run” which combined the artwork with a special bourbon bottle.

We are pleased to announce the second piece in this “Art of the Spirits” collection, titled “The Originals”.  As this series moves forward, it will introduce very different subject matter – the common ground being the art/bourbon package.

With this second piece, we are only offering 30 print/bourbon packages.

This tribute to the Special Forces is beautifully composed. The label on each bottle of small batch bourbon will be signed and numbered to match the artwork.

Each print will be hand-signed by David Uhl and numbered with Certificate of Authenticity.

280 bottles were produced and normally sell for $150 per bottle. The bourbon was matured 3.5 years old in a new 30 gallon American

oak barrel followed by a beauty rest in a 12 year old rum cask.

The 10th Special Forces Group was born in 1952 from the concepts established by the WWII OSS.  It was the first Special Forces unit created earning its name “The Originals”.  Establishing its headquarters in Germany and sending personnel to Korea training anti-Communist North Korean partisans, its mission was to conduct partisan warfare behind enemy lines in Europe.  It created and adopted the Trojan Horse Badge and began adorning the Green Berets they wore, with them creating the symbolic Green Beret.

Operation RESTORE HOPE lead the 1st Armored Division into Bosnia in December 1995 operating under the cover of Joint Commission Observers (JCO).  In Kosovo the unit conducted some of the first Joint Russian/American Combat Operations against KLA insurgents.  In 2001, selected members were deployed with their 5th SFG brothers for the initial operations in Afghanistan, and were the first to enter Iraq prior to the invasion organizing and leading Kurdish Peshmerga to fight.

So raise your glass in a toast to all “The Originals” past and present who have stood ready to engage liberty’s enemies “By Any and All Means Necessary”.

Because this will be an ongoing series, purchasers of “The Originals” will be offered the right of first refusal to obtain their matching print edition numbers on past and future releases.

Prices are subject to change based on aftermarket availability. 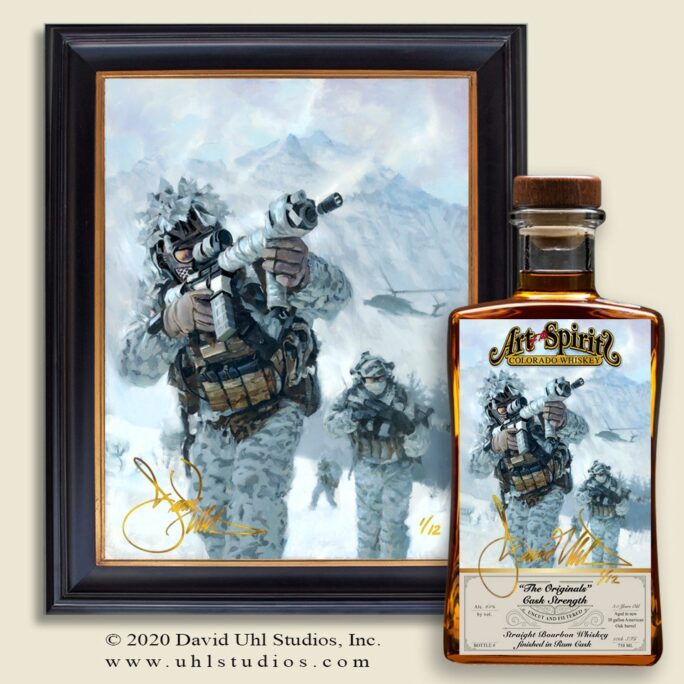