This piece was conceived in conjunction with the Shelby American Museum in Boulder, Colorado and took countless hours of historical photo referencing along with the obvious time spent at the easel. “Snake Oil” features legends Carroll Shelby and Bob Bondurant and the timeless Shelby Cobra celebrating the peak of the Ferrari Wars.

A brief history provided by Eddie O’Brien with the Shelby American Museum in Boulder, Colorado:

This is a compilation of all the races Bob Bondurant raced in Europe to win the World Championship, Hill Climbs and Road Races.

This is the Cobra, the Ferrari GTO in the background is correct. Bondo beat it up the Hill by seconds, setting new hill climb records again by nearly 3 seconds. It took a Ferrari LM a year later to match it. The Cobra was running on 7 cylinders crossing the timing lights! Bondo said the car was never straight even on the short straightways.

Very rarely does David allow the signing of his works by anyone else. Fortunately, he is making an exception this time! A limited number of each size of print will be signed by both Bob Bondurant and Carroll Shelby. 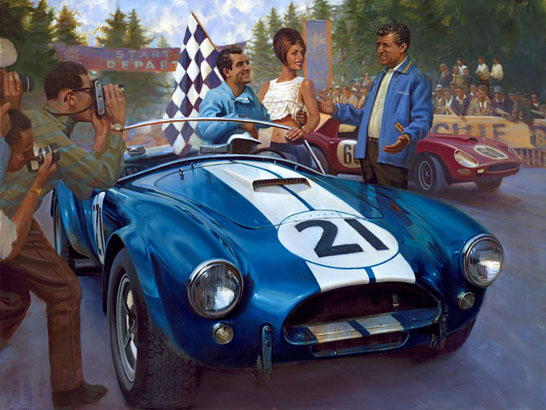