As part of David’s commemoration of the 50th anniversary of the Shelby Cobra, we are pleased to offer “Hey Little Cobra”.

In David’s words, “After discovering an excellent story that was hiding in the early ’60’s, I came to know a famous singer/songwriter, Carol Connors. Around the time that Carol charmed America with the single “To Know Him Is To Love Him”, she became friends with Carroll Shelby. A couple of years later when all the songs about cars were featuring Hot Rods (like the Beach Boys’ “Little Deuce Coupe”), Shelby approached her about writing a song about his Cobra. He further stated that if it became a #1 hit, he would give her a car. Well, the song shot to the top of the charts and Carol got a brand new burgundy Cobra! Her career escalated and she went on to do some truly remarkable works in the music industry. She currently lives in Beverly Hills and hasn’t slowed down a bit. I chose to paint her in the older pin-up style to reflect the period. The original is oil on canvas, measuring 30″ by 40″. ”

Each of the canvas giclee prints will come hand-signed and numbered by David Uhl with a Certificate of Authenticity. 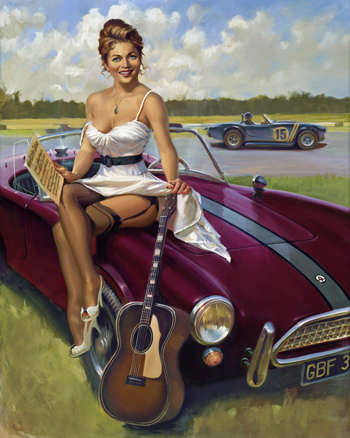