As you may know, David Uhl’s image “Glorious Failure” graced the program cover of the Indy 500 in 2008. We are excited to announce that David has been selected as Program Cover Artist again for this year’s 100th anniversary of the Indy 500! The piece, titled “In the Beginning”, depicts the first running at Indy in 1911. Likened to Norman Rockwell on CBS Sunday Morning, artist David Uhl is honored to be selected Program Cover Artist for the historic running of the 100th Anniversary Indianapolis 500. David Uhl has devoted much of his career to creating masterpieces reflecting his passion for the romance of eras past. His understanding of light and color has allowed him to provide beautiful windows into historically intriguing subjects which were originally recorded in black and white. Because of the timeless nature of his works, David’s pieces are sought after by a diverse range of collectors around the world.

In David’s words, “After viewing hundreds of archival photographs, a singular image did not present itself as suitable for the occasion. Instead I chose to combine several elements to recreate this dramatic moment from the inaugural race. I especially was attracted to the elegance of the Victorian-clad spectators contrasted against the fierce, dusty drama unfolding on the track. It was not only an honor to be selected for this, but it was a really fun piece to dream up. I was elated to be invited to the museum to view the old glass plate negatives from the earliest of the Indianapolis Motor Speedway’s archives. Many great stories were told me by Mr. Donald Davidson, the historian at the museum, so I put some to paint.”

Donald Davidson, IMS historian, explains “It is an iconic moment as eventual winner Ray Harroun carves his way through lapped traffic in turn one of the Indianapolis Motor Speedway on his way to winning the very first 500-Mile Race on May 30, 1911. Because of complaints from other teams that the engineering department of the local Nordyke & Marmon passenger car firm had produced a special single-seat car which did not allow for the commonly used riding mechanic (serving, among other things, as a second “pair of eyes”), driver/engineer Harroun rigged up above the cowling of the #32 Marmon “Wasp” what is believed to be the very first rear-view mirror ever used on an automobile. Out-distancing 39 other contestants, mostly driving stripped-down versions of current passenger cars, Harroun won in a time of six hours and 42 minutes to average 74.602 mph, witnessed by a huge crowd estimated in the region of 80,000, many of whom had come by rail from New York, Chicago, Cleveland and St. Louis. The winning team earned $14,250 from a total purse in excess of $30,000, which was a huge amount for the time.”

This particular image is a never before seen version of the inaugural race in 1911. The original oil painting measures 36″ x 48″. To celebrate this historic event, David has agreed to offer an edition of signed, numbered canvas giclee prints. He is also packaging a limited number of “Glorious Failure” prints with “In the Beginning” for those who want both pieces.

Print comes framed with certificate of authenticity and Commemorative plaque.
Prices are subject to change based on aftermarket availability.
To reserve your print or inquire about the special package pricing, please contact Greg Rhodes at: 303-913-4840 or greg@uhlstudios.com. 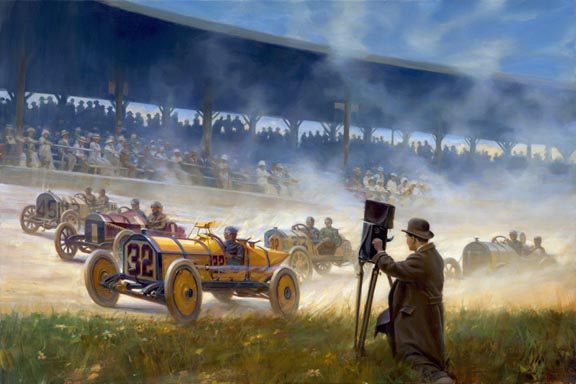