We are pleased to announce the worldwide release of David’s latest masterpiece featuring the unlikely combination of two American treasures: Harley-Davidson and baseball. Read on to see how this project came about…
Titled “Passing the Torch”, this piece is a generational tribute to fathers and sons and their involvement in two great American pastimes: motorcycling and baseball.
Last year, David was approached by Hellbender Harley-Davdison in Atlanta, Georgia. They were building a new store, Tomahawk Harley-Davidson, at the new Atlanta Braves ballpark and thought the combination would make a unique painting. Hall of Fame Braves pitcher Tom Glavine was kind enough (along with his son Kienan) to serve as David’s models. The H-D with sidecar was graciously loaned by Dale Walksler and the Wheels Through Time Museum in Maggie Valley, NC.
David thought the Warren Spahn statue at the ballpark would really add to the piece. What we didn’t know at the time is that Tom Glavine indirectly patterned his pitching career after that of Warren Spahn. Tom’s father, who didn’t know much about pitching, would tell young Tom that he heard Warren Spahn saying things about pitching and he relayed them to Tom.
The oil was originally shown at a private gathering with the Glavine family on June 9th and the official unveiling took place on June 23rd at Tomahawk Harley-Davidson’s Grand Opening party. Canvas prints are being offered in 4 sizes. You’ll see a theme below with #47, Tom’s jersey number.
Each print will be hand-signed and numbered and come with a Certificate of Authenticity. As a bonus, Tom Glavine has graciously agreed to sign each print as well!
Prices are subject to change based on aftermarket availability.
To reserve your print please contact Greg Rhodes at: 303-913-4840 or greg@uhlstudios.com
Keywords : Harley art, Atlanta, Braves, baseball 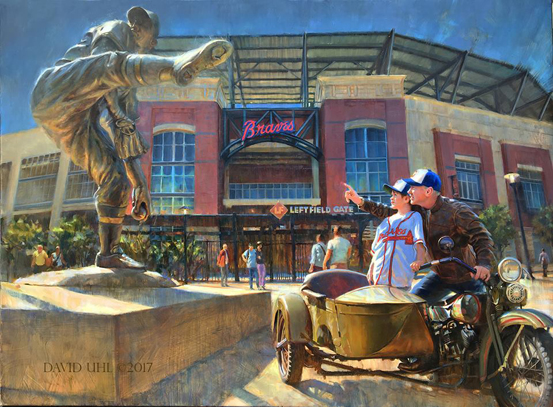