On June 9, 2016, renowned artist David Uhl, of Uhl Studios released his tribute painting to Harley-Davidson and its presence in NHRA drag racing with a rendition of Joe Smith, the Harley Davidson motorcycle drag racing legend who brought notoriety to the marquee while racing with the National Hot Rod Association from the 1950’s into the 1970’s.

The oil on paper is David’s rendition of his impressions of B&W newspaper clippings featuring Joe Smith racing on the drag strip in sunny Southern California. Joe Smith raced this Harley Davidson Knucklehead, which he created as his first drag bike in 1956. Joe actually did twist the throttle with his right hand while reaching down with his left hand to put the Knuck into the next gear, while racing the quarter mile at blinding speeds. You can feel the adrenalin Joe once experienced just by looking at the painting.

While racing with the NHRA, Joe became the first drag bike pilot to push his Harley Davidson into the eight second elapsed time zone, a feat he accomplished in March of 1971. He then went on to win the prestigious NHRA, US Nationals that same year. Joe also won Indy in 1974 and again in 1975, becoming the only three time winner of the NHRA US Nationals on a Top Fuel Harley Davidson powered drag bike. By Thomas McCarthy

Signed and numbered canvas prints in two sizes are now available for purchase. 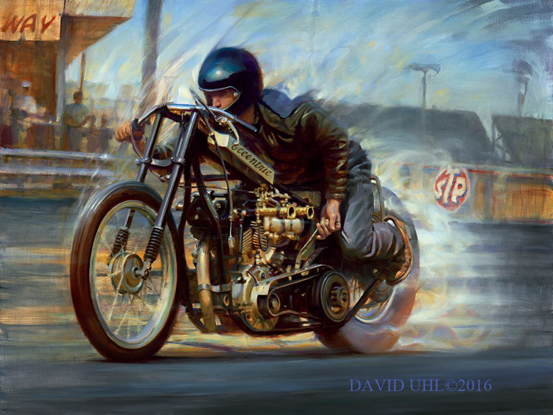